One of the oldest operating apple orchards in Vermont, Douglas Orchards has always been about family, good food, and tradition. Growing the land into a thriving apple orchard that’s become an important tourist attraction and community asset, offering pick-your-own apples, strawberries and raspberries, as well as fresh-pressed cider, cherries and pears.

Now a part of the Champlain Orchards family:
The Douglas family purchased the land in 1898 and milked cows through the 1920s and ’30s. Scott and Bob Douglas were the fourth, and final generation of Douglas’ to operate the farm. “Before selling the property, we wanted to protect the land from future development. We’ve worked hard to maintain and adapt the orchard over the years. It feels good to ensure it will continue to have a role in Shoreham’s agricultural future.” - Scott Douglas. The Douglas family worked with the Vermont Land Trust to protect the Douglas Orchard & Cider Mill’s 181 acres. The conservation easement ensures the land will remain available to future farmers. “For the past 22 years I have been emulating Bob and Scott Douglas as they care for their family farm and orchards, just down the road from us. After years of discussions and planning, we were able to officially purchase the 180-acre farm, allowing Bob & Terry, and Scott & Sue Douglas to officially begin a well earned retirement. The Douglas family has been very supportive of Champlain Orchards over the years and I am thrilled to be able to preserve this historic orchard for future generations and continue on their legacy and values." -Bill Suhr

Orchard, Pick Your Own Fruits, and Farm Market 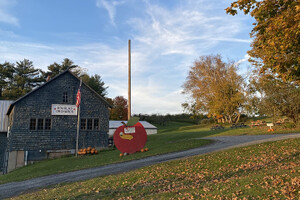